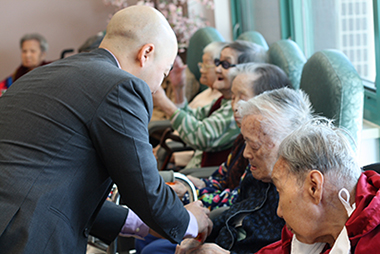 1918 - The Montreal Chinese Hospital was established by Mother (Superior) Mary of the Holy Spirit, of the Sisters of the Immaculate Conception. At that time, the Hospital was a temporary facility to meet the medical needs of the Chinese community during the influenza epidemic.

1919 - The Chinese community acquired a synagogue at 112, rue de la Gauchetiere and converted it into a Hospital. They had financial support from the Sisters of the Immaculate Conception and the community-at-large.

1962 – The City of Montreal declared that the building was no longer usable as a hospital as it was too outdated. A fundraising campaign for one million dollars was launched to build a new hospital.

1965 - The new, 64-bed hospital opened on 7500, rue Saint-Denis. Most patients were in long-term care, but the Hospital also offered obstetrical and other specialized medical services.

1969- The Obstetrics Department was closed and the Hospital became a long-term care hospital including an outpatient clinic offering a variety of medical services.

1971- As required by Act 65, the Hospital became public and three separate agencies were created:

1979-The Quebec government approved the addition of a 44-bed Day Center. Its construction ended in 1982.

1987-Fundraising campaign for proposed expansion had unprecedented success in the Chinese community and raised $2.2 million.

1997-Approval was finally received from the Ministry and construction began of a 128-bed hospital.